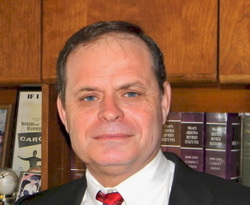 After law school, Doug worked briefly as a criminal defense attorney until he joined the law firm of Evans, Kitchel and Jencks. In 1983, he formed his own law firm where he worked until joining Phil Hammond in 1991. Doug has tried many cases in the Arizona courts and is proud that he has achieved the highest rating possible of AV from Martindale-Hubbell, a national organization that uses peer reviews to rate attorneys. Attorney Doug Tobler has completed a 32-hour mediation training course conducted by the American Arbitration Association and is available to serve as a mediator in all civil disputes. He has extensive experience in resolving business and personal disputes as well as creating and maintaining business entities.

Doug and his wife, Cheryl, have been married for over twenty years and share four wonderful children. When he is not practicing law, Doug writes novels (unpublished as of now), reads, exercises and sings karaoke – usually very close to on key. He did play adult baseball into his fifties, when he is fairly certain the pitchers started using a smaller ball that made hitting impossible.

Hammond & Tobler, P.C. serves clients in Tempe and throughout the greater Phoenix area in Arizona.

We will respond to your inquiry in a timely fashion. Thank you.